Start a Wiki
Miles Prower (マイルス・パウアー Mairusu Pauā?, lit. "Miles Pouer"), better known by his nickname, Tails (テイルス Teirusu?), is one of the main characters in the anime series Sonic X and its comic series published by Archie Comics. He is a two-tailed fox from an unnamed world in a parallel dimension to Earth and Sonic the Hedgehog's best friend. He quickly befriends fellow inventor Chuck Thorndyke, who helps him build the X-Tornado jet-plane.

Tails is a young, anthropomorphic fox cub with a unique mutation of two tails instead of one. He has mostly yellow-orange fur with white fur around his muzzle, front torso, and the tips of his tails. He also has blue eyes. Typically, his attire consists simply of white gloves and red shoes with white toes.

Tails is the loyal sidekick to Sonic. He is very intelligent and acts very kind and friendly to others, and as well humble and innocent. His best human friend is Chuck Thorndyke; the two create mechas together including the X Tornado. Tails has also been shown to be rather shy and he often had little confidence in the beginning of the series as he depended on the other characters, especially Sonic, to help him in times of need. Due to his timidness, Tails was often overshadowed by the other characters as he can be seen often keeping quiet as the far more outspoken characters got their ways in discussions. However, through the series Tails gained more courage and developed more leadership skills, which was especially seen in Season 3 where he was the captain of the group (being the owner of the Blue Typhoon) and his love for Cosmo furthered his courage.

Possessing a genius-level intellect, Tails has a talent for tinkering which enables him to turn out high-tech gadgets with ease. Tails can fly using his two twin-tails in a similar way as in the games and when he was defending Cosmo from Shadow he used them to protect her against his much more powerful adversary, even to the point of being injured severely. Also, when he fought against Hawk in a contest, he used his strong twin-tails to absorb most of his opponent's attacks. 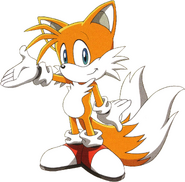 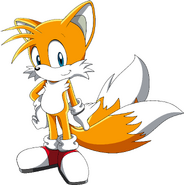 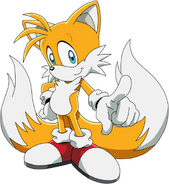 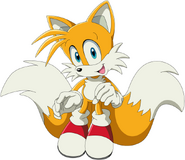 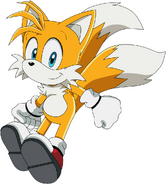 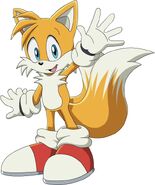 Retrieved from "https://miles-tails-prower.fandom.com/wiki/Miles_%22Tails%22_Prower_(Sonic_X)?oldid=1362"
Community content is available under CC-BY-SA unless otherwise noted.