Start a Wiki
Miles "Tails" Prower is a character that appears in the Sonic the Hedgehog film. He is an anthropomorphic two-tailed fox from another planet looking for Sonic.

Tails is a young, anthropomorphic fox cub with a unique genetic mutation giving him two tails instead of one, however, they only separate when he is about to fly. He has mostly orange fur with light yellow fur around his muzzle, front torso, and the tips of his tails. He also has blue eyes, triangular ears with light yellow canals and three locks of hair on his forehead. His attire consists of white gloves, and shoes that are red from the heel to the middle, and white from the middle to the toe. 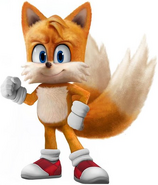 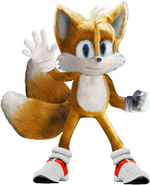 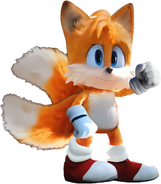 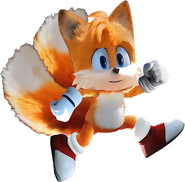 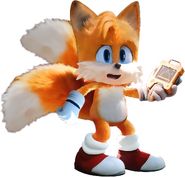 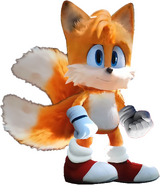 Tails appears from a Ring portal, having apparently tracked Sonic the Hedgehog to Earth and Green Hills. He takes off to find him, hoping that he is not too late.

Retrieved from "https://miles-tails-prower.fandom.com/wiki/Miles_%22Tails%22_Prower_(Sonic_the_Hedgehog:_Film)?oldid=971"
Community content is available under CC-BY-SA unless otherwise noted.