Start a Wiki
Miles "Tails" Prower (born 3225) is a character that appears in the Sonic the Hedgehog television series. He is an anthropomorphic fox with two tails that allow him to fly, who is cared for by the Knothole Freedom Fighters. A young lad, Tails was initially kept from going on missions with the Freedom Fighters due to his age. However, after undergoing training with his friends, Tails would prove himself through resourcefulness and maturity, eventually earning a spot among the Freedom Fighters. His best friend and idol is Sonic the Hedgehog.

Tails is a short anthropomorphic fox with a unique genetic mutation giving him two long and fluffy tails instead of one. He possesses burnt-orange fur and beige fur on his tail tips, muzzle, and belly, and has both cheek tuffs and three hair strands on his forehead. For attire, he wears red and white shoes and white gloves.

Tails is very innocent, friendly and child-like. He sees all the other Freedom Fighters as his family, and he looks up to Sonic in every way. Even though he is often being told that he is too young to go on missions, Tails has a deep desire to get involved in the fight against Dr. Robotnik.

Despite his age, Tails has a very intelligent and perceptive mind, such as when Dr. Robotnik made a robotic copy of Sally and he immediately recognized it as a fake. He similarly guessed that something was wrong with Sonic after he had been affected by the Memory Scrambler. His is biggest contribution to the Freedom Fighters, however, was when he helped them secure one of the Deep Power Stones and devised a plan to trick Robotnik with a fake stone. Because of his eagerness to participate in missions, Tails can sometimes jump into situations too fast without careful consideration or informing others of his intentions. However, he has a huge heart for everyone he meets.

Tails possesses two large, fluffy tails that can twirl together. By twirling his twin tails around like rotary blades, Tails is able to lift himself off the ground and fly around like a helicopter, allowing Tails to move freely through midair. While in flight, Tails can move around with enough speed to keep up with even Sonic.

Under Sally's Tutelage, Tails has also learned a little about technology and is able to sabotage various Robotnik machines. 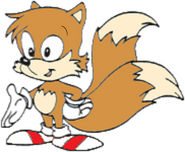 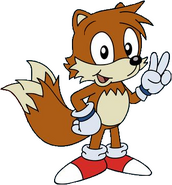 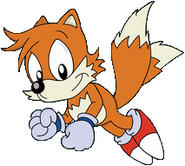 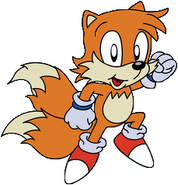 Retrieved from "https://miles-tails-prower.fandom.com/wiki/Miles_%22Tails%22_Prower_(Sonic_the_Hedgehog:_SatAM)?oldid=995"
Community content is available under CC-BY-SA unless otherwise noted.